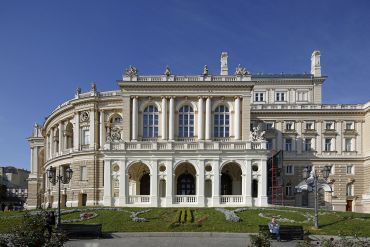 Odessa is a relatively young city compared to Regensburg. Built between 1792 and 1814, it was awarded city status on 2 September 1794. However, the history of its settlement dates back much further. Many centuries ago, Slavic tribes settled in the area. However, only after its recapture from the Ottomans did a well-designed, uniform building plan lead to the creation of the chessboard-like and generously proportioned city we see today. Odessa - with a population of about million - is the third-largest city in Ukraine and has made a name for itself as an industrial centre, cultural metropolis and health destination. The city stretches 50 kilometres from north to south along the Bay of Odessa and covers an area of 187 square kilometres. Odessa is the most important shipment port in the Black Sea. Half of all Soviet passenger ships and a third of all merchant ships had their home port in Odessa. The city is home to numerous industrial companies, dominated by mechanical engineering, metalworking and food industries. A third of the jobs are connected to the port or the sea. Ukraine's declaration of independence set off a process of restructuring the city’s production and trade capacities, a project which continues to this day. For example, the number of people visiting the city for recreation (which used to double the population of Odessa in the summer) has declined.

As an old university city, which is home to Mechnikov University as well as fifteen other higher education institutions, Odessa is one of Ukraine's centres of science. The biologist and bacteriologist J. J. Mechnikov, who the university is named after, was awarded the Nobel Prize in 1908. Odessa's colourful and vibrant cultural life is most evident in its six theatres, philharmonic orchestra, six museums and circus. Approaching the city by sea, it becomes clear that Odessa is one of the most beautiful cities and not just in Ukraine. High above the harbour on the steep bank, you can see the city's impressive landmarks - the opera house, the white columns of the Vorontsov Palace and the magnificent 192-step Potemkinskaya stairs which take visitors from the landing stage up to the sea promenade. In 1988, the University of Regensburg signed a partnership agreement with Mechnikov University, which was followed by the twin city agreement in 1990. The people of Regensburg express their solidarity with the twin city through numerous donations and regular aid programmes in Odessa. This has resulted in friendships being formed across the 2550 km distance. April 2010 saw the inauguration of the newly rebuilt, Lutheran St. Paul's Church. Regensburg donated the largest of the new church bells. Over the past few years, a lively youth and student exchange programme has developed, which now plays a big role in the partnership. New connections were also established in the area of social inclusion and these are still being intensified. 2020 will mark the 30th anniversary of the twin city agreement. Plans are also in place to build a Regensburg Park in Odessa, which will open during the anniversary year. The joint planning process was part of a municipal development cooperation programme. In the same year, an ‘anchor heart’ - a sculpture donated by the city of Odessa to the city of Regensburg as a symbol of their friendship - will be erected on the Marc-Aurel-Ufer and unveiled in a separate ceremony.