On 12 May 1969, mayor Gabriel Montpied and chief mayor Rudolf Schlichtinger signed a twin city partnership between Clermont-Ferrand and Regensburg. This makes Clermont-Ferrand (with a population of over 141,000) our second-oldest twin city after Aberdeen. 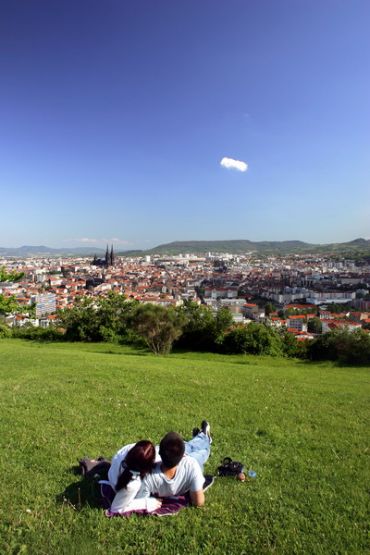 The city, which was founded in Roman times around the birth of Christ, is situated in a favourable geographical location in the heart of France. Nestled into a volcanic arc, it has considerable historical heritage. Not far from the city is the Gergovia plateau, where Vercingétorix defeated the Roman troops. The city centre has numerous Romanesque churches. Blaise Pascal was born in Clermont in 1623. In the 17th century, Clermont merged with its medieval neighbour Montferrand. Clermont-Ferrand has an international airport and is connected to major international cities by a network of motorways and railway lines. The city’s most important business and largest employer is the tyre manufacturer Michelin. Since 2017, the city of Regensburg has taken part in the Conference of the International Network of Michelin Cities based in Clermont-Ferrand, which takes place every two years in a participating city. Clermont-Ferrand’s twin cities and the cities where a Michelin production or research site is located are invited to the conference.

The appeal of our French twin city, which describes itself as "the city of art and leisure", lies in the treasures of its past, its modern architecture, as well as its wealth of recreational and leisure facilities. Only six years had passed after the signing of the Elysée Treaty on Franco-German Cooperation by President Charles de Gaulle and Chancellor Konrad Adenauer, when Clermont-Ferrand and Regensburg became twin cities. Today this twin partnership has become an integral part of both cities. For example, every year Clermont-Ferrand and Regensburg host summer youth exchange programmes, and a school and avenue in Regensburg are named after Clermont-Ferrand. There are frequent mutual invitations to sports events and the organisers of the cities’ two short film festivals have participated in a number of successful joint projects.

The city used to have two universities, Université d`Auvergne and Université Blaise Pascal, though these merged in 2016 to become Université Clermont-Auvergne, which now has nearly 32,000 students. The University of Regensburg and Université Clermont Auvergne jointly run a binational degree course in "German-French Studies". Since September 2017, as part of a partnership between OTH Regensburg and Grande Ecole SIGMA in Clermont-Ferrand, students have also been able to gain a double degree in mechanical engineering. In September 2017, the twin cities launched the German-French Voluntary Service. New connections were also established in the area of social inclusion. In 2019, both cities celebrated 50 years of friendship and the occasion was marked with numerous joint activities.